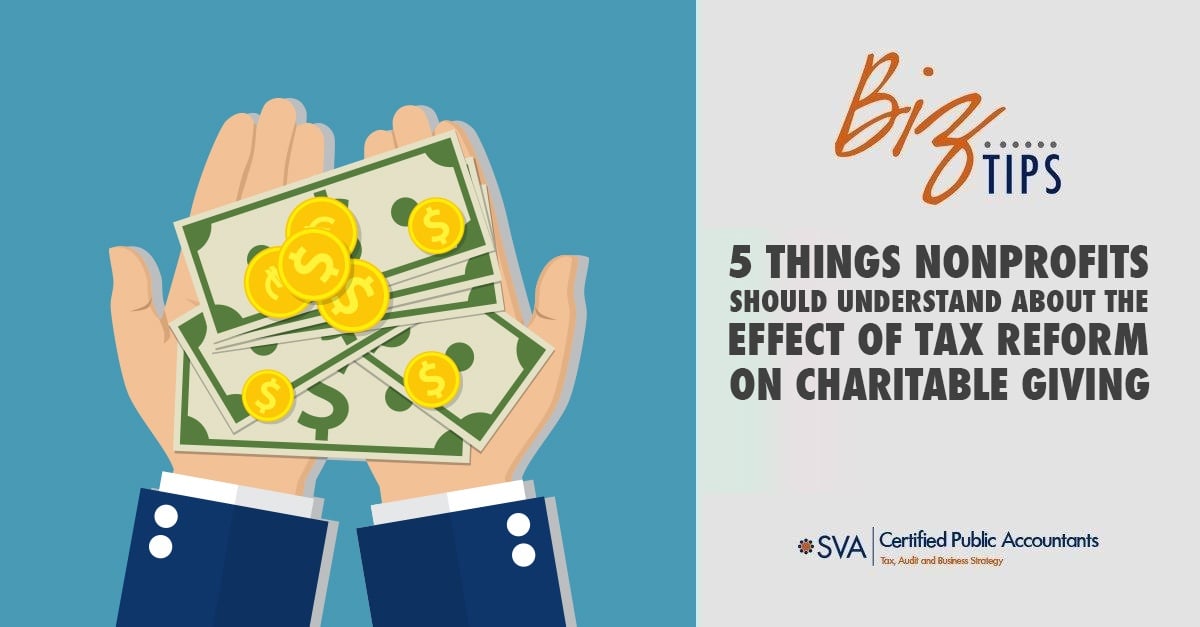 The Tax Cuts and Jobs Act (TCJA) enacted in late 2017 significantly changed the federal tax code. While the changes will affect individuals and businesses of all types, the nonprofit sector needs to carefully monitor how the new law impacts their finances and operations. Here are five key things to consider.

1) Fewer taxpayers can use the charitable deduction

The TCJA lowered tax rates for all income groups but reduced the value of certain itemized deductions to help offset the cost of those rate cuts. In addition, the standard deduction was nearly doubled from $6,350 for single filers and $12,700 for joint filers to $12,000 and $24,000 respectively.

Altogether, these changes will substantially lower the number of taxpayers who itemize when they file their tax returns. The Joint Committee on Taxation (JCT) estimates that the new law will cause the number of filers who itemize to drop from approximately 30 percent to 13 percent. With fewer people itemizing, fewer people will be able to deduct their charitable donations.

2) Tax benefit of the charitable deduction has been reduced

For those who still itemize, the tax benefit from the charitable deduction will be slightly smaller because it is applied against lower tax rates. Consider a taxpayer with income in the 28 percent tax bracket that now falls into a bracket taxed at 24 percent. If that person has $1,000 in taxable income and decides to donate $100, under old law, their tax liability would fall from $280 to $252. That left a tax benefit of $28. Under the new law, their tax liability would go from $240 to $216, a benefit of $24. Because of the TCJA, the taxable benefit from the charitable deduction in this transaction is $4 lower.

Although Congress considered eliminating the estate tax, the tax was kept in place. However, the exemption amounts were essentially doubled, from $5.6 million to $11.2 million for single filers and from $11.2 million to $22.4 million for joint filers. Estate planning often involves charitable contributions to reduce the amount of income subject to the estate tax. Since fewer estates will now face the tax, the incentive to leave parts of an estate to a charitable nonprofit has been reduced.

The TCJA may alter not only the use of the charitable deduction, but also the direct finances of nonprofits. Previously, a nonprofit could aggregate all its net income from various businesses, using losses from one entity to offset gains from another. The TCJA requires that nonprofits now report unrelated business income for each entity separately. However, the top marginal corporate income tax rate was lowered from 35 percent to 21 percent, so any unrelated business income subject to tax could be subject to less tax depending on the nonprofit’s structure.

5) Higher after-tax income for most households

While some of the three factors above could have a marginally negative impact on charitable giving, it may not have the impact some fear. Independent policy groups estimate that charitable giving could decline by approximately 4 percent to 5 percent in 2018.

A sizeable portion of the decline is attributable to the growth in filers taking the standard deduction. But individuals give to charitable nonprofits for many reasons. Taxpayers who haven’t had access to the charitable deduction still give to charities. Furthermore, most taxpayers should see an increase in take-home pay due to the net tax cut from the TCJA. Depending on economic factors, households of all kinds may donate more if they have more disposable income.

Future policy changes could still occur. Meanwhile, some policymakers want to make the charitable deduction available to all taxpayers, not just itemizers. All the individual income tax changes put in place by the TCJA are set to expire after 2025, so in any case, Congress will have to again tackle these issues in the coming years.